As a bit of a techie I like my gadgets. I’m not over the top in this respect, but I like it when technology can improve my life or do something useful. So when I buy new “toys”, I’ve generally thought quite hard about it.

I really don’t intend to start making this a “Gadget Review Blog”, but when I buy new “toys” I’ll try and say why I bought them and what I think about them in the hope that my thoughts benefit someone else – or myself at a later date.

Why buy a little MP3 player?

The background to this is that, after much deliberation, I bought a big-proper 30GB Apple iPod about a year ago. I’m very pleased with this and it’s good for long journeys, by train or car, or to give me a day’s tunes at work. But, despite being almost miraculously small for what it does, it’s too big and too fragile to be used when walking, cycling (on quiet roads only of course), or when at the gym.

So, for a while I’ve been thinking about a cheap, ultra-small, solid-state music player to go alongside it. For the less-technical, solid-state means that it has no moving parts. Given that I like iTunes (for reasons I won’t go into here), an iPod Shuffle seems like the obvious choice – as it will easily sync to an iTunes playlist (or smart playlist). It took a while to come around to the idea of a player without a screen, but I can see how it fulfills the need to just shove something in your pocket full of your favourite tunes, and go. So a Shuffle has been on my shopping list for a while.

THEN, I discovered iTunes Agent, which is a far-from perfect piece of software, but one which allows you to sync non-Apple devices with iTunes. This opens up the possibilities a bit more.

Originally I sync’ed my Sony Ericsson Walkman mobile phone with it, and took that to the gym a few times. However, the controls on the walkman phone aren’t great (they get locked out by the phone’s “auto-lock” feature) but then I found the Creative “Stone”.

The “Stone” is Creative’s equivalent of the iPod Shuffle. It’s got 1GB capacity, no display, simple controls and ~8 hours battery life. At around £23, it’s about half the price of an iPod Shuffle! Bargain.

So I got one. Here it is with headphones, close up, and next to some chewing gum for scale! 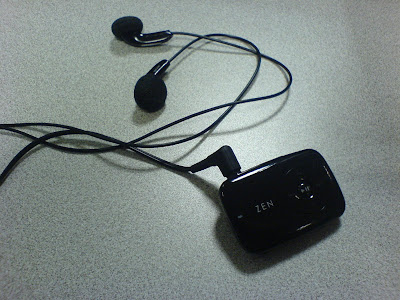 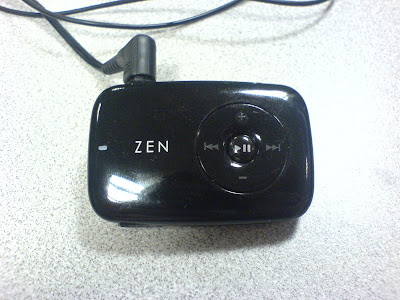 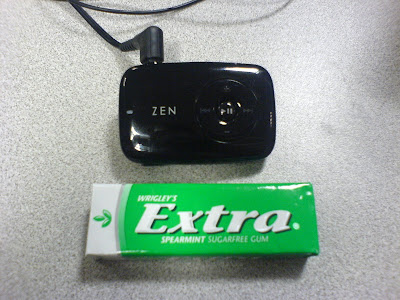 Looks pretty. Looks TINY!!! But does it do the job?

And I’m happy to say that yes, it does. It’s easy to use, sounds good and does everything that it says it does. I’ve not had the battery run out on me yet. It feels sturdy and has survived many hours in my pocket already without much damage.

I could only pick out three odd things, though these are more observations than annoyances.

Overall, I like my “Stone” and I’m glad I bought it. It serves a simple purpose and will make many a trip to the gym with me. I’d recommend it to someone that wants a simple, cheap, micro-sized media player, and with iTA, you can sync with iTunes and have a “Shuffle” equivalent for half the price.