Now here’s a thing that’s quite contrary. I’m not a very trusting person, while at the same time, I tend to believe what people tell me.

I think it’s all down to experience.

If someone says, for example, that they’ve got tickets to go see the Spice Girls at Wembley stadium. As long as it’s not said with a fairly strong tone of irony or sarcasm, I’ll believe that!It’s pretty believable.

If, however, my wife told me that she’d had a piece of toast with peanut butter and really enjoyed it, I probably wouldn’t take her word for it, and would insist on checking the jar. If something seems unlikely to me, I will check it out. This sounds reasonable, but I often feel like I’m unnecessarily doubting people when such things happen.

And so, with my sense of mistrust on red-alert, I was confronted with shelf hanging. Our house has lots of bare walls, which with a few planks of wood, can easily be utilised as storage space.

A quick trip to B&Q to buy the aforementioned wall furniture, and a drill, and we were off! Sally claimed I went a bit “drill crazy” at first – she probably had a point. We have a lot of holes to make! 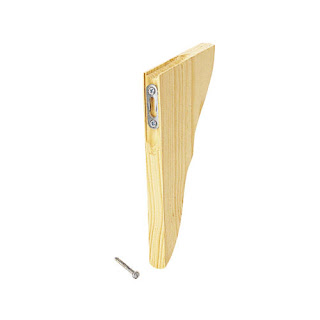 But, while confident with making holes, I had doubts about the fittings. Most of the shelves we hung were held up by little “keyhole” fixings. A small, thin plate of metal, with a keyhole-shaped hole in it, that hung over a single wall screw.

And the instructions tell me that two of these little things will hold 25 kilograms?! That’s 25 litres of water? It’s more than a third of my body weight? Over 3 times the weight of an official men’s shotput shot? And the average weight of an antarctic cod? (I’m open to other suggestions as to what this is the equivalent of)

And so, with the shelves up, I nervously started loading them up. I have no experience of this kind of thing, but I know that recipe books are heavy. I was very tentative. I told Sally to keep the heavy ones on the worktop – no Nigel Slater or Nigella up there!! I tried to carefully distribute the load between the two supports. I went round inspecting them every day for about a week. I cautiously pulled them occasionally to check that they’d take a little more weight.

It was very much a test of faith!

Lots of DIY seems to be like this. Trying it out, sometimes failing, learning as you go, but having the confidence to have a go in the first place, and to try again if you fail. I’m very much having to overcome some of my doubts and trust what people tell me in order to get things done.

It turns out that shelves are pretty sturdy, and two little metal plates can take a fair bit of weight – I don’t know that I’ve risked 25kg yet and I don’t have any shot or antarctic cod to test it with, but we’ve got some heavy – and fragile – stuff, hanging on the walls of our kitchen now.

Not only that, but I’m now a fully competent, drill-crazy, shelf hanger!

A few USEFUL things that I learned along the way: