Menu
Part…umm…well…the last part!
I’m probably on about part 74 of my holiday write up now.  You’ll be glad to hear that it’s (probably) the last one.
After climbing Etna on the Friday, Saturday was supposed to be a bit of a day off.  But the thought of just doing nothing somehow didn’t appeal.  We had plenty of crosswords to try and get through, but we wanted to explire Sicily’s interior a bit too.  Plus it was a little cool and cloudy and not necessarily day-by-the-pool weather.
Necropoli de Pantalica
So we embarked on a trip to Pantalica. 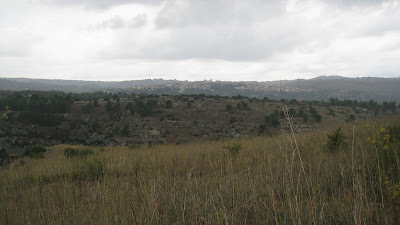 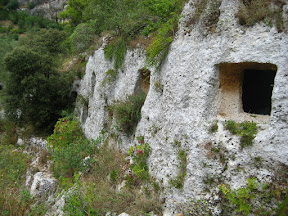 An hour or so’s drive on some very steep and windy roads through the Sicilian countryside brought us to this beautiful place, listed as a UNESCO World Heritage Site.  A necropolis – a ‘city of the dead’.  An unspoilt nature reserve full of cliff-side tombs dating back to around 1300BC.  A wild and eerie place.  All the tombs are empty now but you are left with a feeling of awe and reverence for the place, and the people that build it.  Who would be climbing sheer cliffs, risking life and limb cutting holes in the rock with primitive tools?  It leaves our puny burial ceremonies looking fairly shabby in comparison. 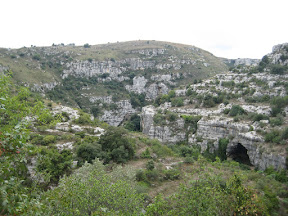 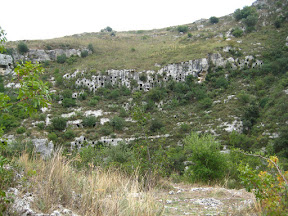 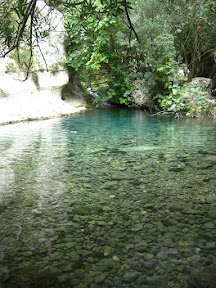 We spent a while exploring Pantalica.  There is a clear path marked all through the valley and “exploring” basically involves following the path in one direction, and then re-tracing your steps back to the car. We stopped off next to a shallow pool on the way, for some lunch.  This really could have been a film set or something, it was almost unreal in its purity and beauty.
On returning to the car we set out to find some other, less spectacular Necropoli nearby, which were also quite spectacular.  Tombs, dwellings and even churches carved out of the rock amongst breathtaking scenery.
This place is mentioned in the Rough Guide, and is even one of the listed top 30 things to see/do while there, but you could so easily pass it by.  “Who want’s to go and see a load of tombs?”, but this place is a true gem! 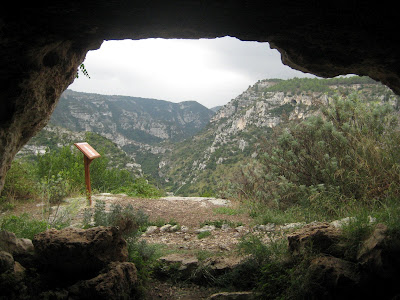 Palazzolo Acreide
Leaving the Pantalica area we checked the Rough Guide to see what else was nearby, and decided to call in at a place called Palazzolo Acreide.  This small town has a great Archaelogical park.  It’s at the top of a fairly big hill, so we recommend taking the car up to the top if you can.
This place is mostly well-preserved Greek tombs, dwellings and temples.  But it brings things slightly more to life because it’s all layed out as a small village.  You are almost transported back in time and you can imagine ancient people wandering around, meeting together and heading to worship.  It feels like a place with community, rather than just a random collection of ancient buildings and artifacts. 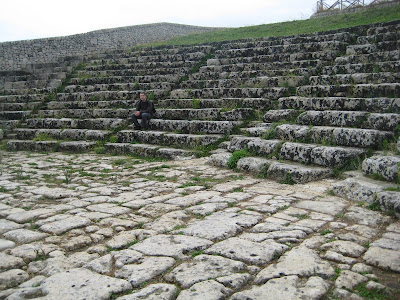 And the highlight of this place was the greek theatre.  Marvellously intact, with an entrace hallway, tunnels to walk through to your seats, and bits of the staging and set still on show.
Dinner back in Noto rounded off our day.  We found a reasonably good restaurant but the service was a bit brusque.  Never mind.
Sunday and Home
Sunday was a real day of rest as we packed and prepared to head home.  Mostly spent around the hotel it was a good chance to chill out.  We blew a load of money on a last meal in the hotel which was GREAT!  I mean, it was one of the best meals I’ve EVER had.  If you’re in the area and not staying at the Masseria degli Ulivi, then at least go and eat there!
Monday was heading home day.  The SatNav took us on a VERY weird route to the airport and failed completely to find us a petrol station.  The small scratches to the car went unnoticed.  And we were amused by the presence of a large number of older English people on our plane, who’d obviously all booked with the same tour operator.  Hearing one of them ordering “Four cappucino americanos” made me feel that I’d done quite well with my Italian, and my order of “Due cappucini e una panina” felt quite authentic in comparison.
The English baggage collection was surprisingly swift and collecting the car from the car park was a doddle.  Re-learning driving on the left was interesting and my brain was well confused for a while, especially at junctions and when we hit the motorway.  But I quickly got back into it.
A great holiday, with a little stressful day surrounded by some amazing places and food.  Summing up the holiday was mostly done in my first post.  Check out the highlights there.
I leave you with one thing that confused and amused us.  Now, my Italian isn’t great, by any means, but I can mostly get by with at least reading signs and notices.  This bottle baffled though,
as the best translation I could do of “Con il suo gusto morbido e delicato…” was “With the delicate taste of death…” 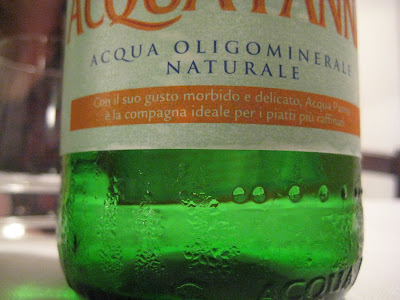 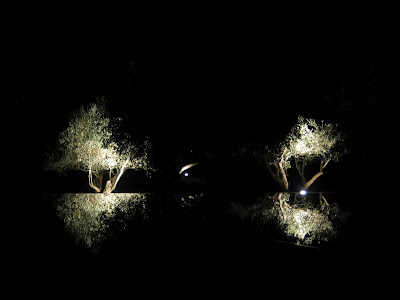