This week there was a mass lobby of parliament about the most pressing and important global issue of climate change. It appears that you attended and were met by some local people. However I, for various work and family reasons, could not attend, but I wanted to write to you in place of lobbying you in person.

I’m a dad. I have a three year old son. He’s cute, charming, and clever. He’s awesome at riding a bike and he loves building stuff with lego. He’ll be at school next year. We’re expecting his teachers to wonder what on earth we’ve unleashed on them. We’re sorry about that.  Sometimes he takes advantage of his adorable nature and runs us ragged. But that’s OK.

I think I’m the proudest dad in the world.

And it’s natural to want the very best for my boy…not just today, not just tomorrow or next week or next year. Not just in about five year’s time when the next election comes around. But when he’s 10, 15, 20, 30, 40 years old, and beyond that into his older years.

But I’m deeply concerned and slightly fearful about the world into which my son will grow up.

I’m concerned that my son will grow up in a world where these things lead to increasing poverty and suffering in the developing world where climate change hits hardest. Where there is the potential for global devastation as our climate approaches, and goes over, a potential tipping point.  Where there is further increasing instability as oil and gas become increasingly sought-after, but finite commodities. And where there is energy insecurity in our own country as we continue to rely on imported energy to fuel our own economy and lifestyles.

I’m not an expert climate change scientist or a politician versed in the details of energy and foreign policy. I’m an ordinary, but very concerned individual, who sees the potential for really bad things to happen in the medium-to-long term, both in this country, and globally.

I fail to understand why, given all the huge issues that continued reliance on fossil fuels could cause, we continue to have vague and woolly policies rather than clear targets and firm commitments. Why instead we seem to have repeated commitments of already-committed plans. And why we seem happy to allow through controversial plans to allow corporates to extract MORE fossil fuels using harmful methods like fracking while reducing subsidies on more sustainable forms of energy generation.

I fail to understand why we aren’t promoting energy efficiency harder: helping to lower costs for businesses and individuals; reducing the load on the energy generation and transmission systems; lowering our impact on the environment and climate change; and helping to ensure that we can generate enough energy for ourselves using clean, renewable methods.

I may have not got all the facts right. And I’m sure that these things are more complicated than they seem to me. But there seems like so much positive stuff we can do. Even if I’m wrong about a few things, are these not hugely positive things that we could do for our country and our world?

So, despite not being able to make the Climate Coalition’s #ForTheLoveOf lobby today, I’m going to ask you to take action. For me. For my son. For ALL of our children, and for their children. And for those in parts of the world that will suffer far more than we will.

I’d like you, and the government to aim for 100% clean, safe energy by 2050, protecting people and nature. I’d like you to do all that you can to tackle climate change domestically and globally. I’d like you to work to reduce our dependance on dirty fossil fuels, and increase our supply of renewables. I’d like you to fight for international agreements to both reduce carbon emissions and to help developing countries cope with the effects of climate change.

I could copy-and-paste the Climate Coalition’s list of what they believe needs to be done by you and this government, but it’s easier for you to just download and read the briefing, below:

If we don’t take action now, make commitments now, set firm targets now, and then do the things we need to do to achieve them, then I’m gonna be asked questions in future: “Daddy, why did people let this happen?”

For my part the answer to that question is “We did our best, son, we did our best.”.  We cycle as much as we can and use the car as little as possible. We haven’t flown abroad for years. We’ve had our house insulated. We’re fortunate enough to be able to pay extra to buy green energy and to try to stimulate growth in green energy demand. We try to grow and buy local food, reducing food miles. We try to reduce our consumption by buying second hand and from charity shops.

But there’s only so much we can do.  You, Justin, have power in parliament, and the opportunity to influence policy and policymakers. The other thing that we can do is to implore you to act on our behalf.

We’re doing what we can.  What will you do to secure a clean, healthy, bright, sustainable future for this guy? 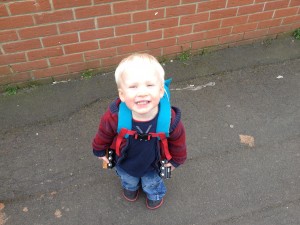