I have now climbed three mountains!

What a weekend. We’ve had this trip to Snowdonia planned for ages. My sister and her boyfriend invited us to climb Snowdon the hard way (via Crib Goch) months ago and this weekend, it finally came about.

Despite the forward planning, for Sally and I it was all a bit last minute. My “post-viral fatigue” had raised questions about whether or not we would go away, let alone climb a mountain, but we decided that we would at least get out of town and spend a few nights in the company of good friends in a beautiful place.

In the event, we DID attempt to climb Snowdon. We set out on Friday morning with the aim of following the Crib-Goch-scrambling party to the start of the difficult bit, and then following an easier track (the Pyg Track) from there on our own steam.

I quite quickly gave up and didn’t make it far past the point at which we split up. My legs got really tired and I just didn’t feel like I’d make it very far. 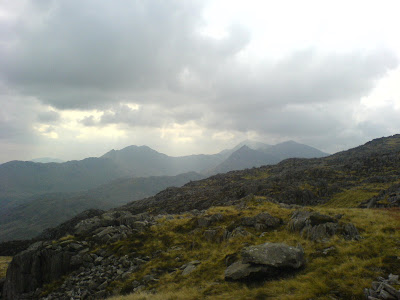 However, on Saturday I tried again – the party headed out to climb Glyder Fach and Glyder Fawr – the other side of the valley from Snowdon, and I went with them with the intention of going as far as I felt comfortable. With a bit of encouragement from the others I kept on going and did a whole 7 hours walk, climbing a total of 800m over a distance of about 10km. Not bad for an invalid – climbing something higher than Scafell. 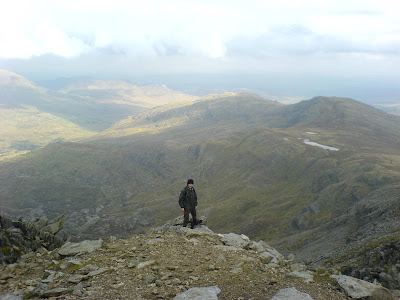 It was a good scramble. We headed up into mist at first and the unclear footpath we were trying to follow lead to some difficult, if unexposed, scrambling. However, the mist cleared once we got to the second peak and we were rewarded with some awesome views of Snowdon and

I WAS shattered today though and the drive back was very hard work.

My health is an odd thing. It feels like Friday’s aborted attempt at Snowdon kickstarted my body a bit – made it realise that, at some point, it would have to stop moping around and get on and do some physical work. I’m also not sure how much of what I’m going through is psychological and how much is really physical.

Anyway, health issues aside, I’ve had a cracking weekend. Snowdonia is beautiful, the hostel was comfortable and the food good, we had lots of fun, and there was a bit of me that looked up at Crib Goch and REALLY wanted to climb it.

There’s something in us that wants to explore, to experience danger, to go to the difficult place. We’ll definitely be back at some point!