Menu
There is much dispute in the cycling community about the quality of German manufacturer SKS’ Race Blades. After my sister gave me some Wiggle vouchers for my birthday (thanks Sarah), I have now bought some and so thought I ought to chip in to the debate.

First of all, for those not in the know, what are Race Blades? Well, they are clip-on mud guards for road bikes that do not require eyelets to screw into or clearance between the brake calipers and the tyres.

I’m an all weather commuter (and rapidly becoming an all-weather trainer too) and Fuzzy, my Felt Road Bike, doesn’t have either eyelets or mudguard clearance. So when I got him I kitted him out with some “Crud Catcher” type mud guards. Not ideal and pretty uncool for a sleek, speed machine: 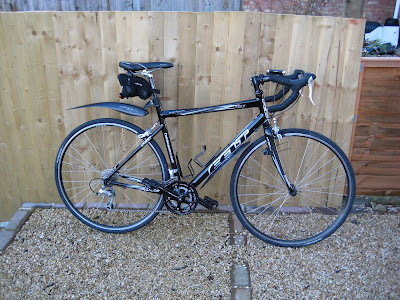 I tried to re-create this photo with the Race Blades but got the bike (and the weather) the wrong way round and I can’t be bothered to do another…here he is with the new kit:

So they look good. But how do they perform?

I guess I’ve had mine for two or three weeks now, through a fairly wet July and a couple of hundred miles of all-weather commuting and I will hereafter join with those who sing their praises!

They were easy to fit and I used the “temporary fittings” so I could easily take them off if I didn’t like them. However, the rubber fittings you see in the photo have done me proud, holding the fenders on with little movement through some of Swindon’s roughest roads. The extra fittings for blade-style front forks are clever too, allowing secure attachment to oddly shaped aero forks, and they come with “permanent” fixings in the form of some cable-ties too.

Riding with them is fine and you hardly notice them there. There is an occasional squeak when you go over a bump and the blade rubs on the tyre, but a little careful alignment (by tweaking the position of the fittings slightly) mostly fixes this.

It’s been a pretty wet July so far and so they’ve had plenty of rain to cope with and I must say, they do a great job! I’ve not had any spray come up at me and, unlike the previous crud catchers, the front blade follows the wheel, protecting me even on corners. I have no experience of group riding so can’t make any claim about the guy behind me getting drenched. I might have to go with the pro’s with their experience of that, however, glancing back, I can’t see much spray coming up at all!

My only complaint so far is that you can bash them when track-standing. You need to be careful to keep your foot out of the way when turning the front wheel a lot. Somehow the difference is only a few centimeters, but it is a BIG difference. Even so, when I have knocked the in this way, they’ve stayed on.

I’m really pleased with my blades. If you’re thinking of buying some I would heartily recommend them.