We here at Wintle Towers have designs of our own. Shunning both the public nature of blogs and Twitter and the longer messages you can post to your friends and circles using Facebook or Google+ we’ve developed our own social network which we think you’ll agree pushes the boundaries of security, openness, and character limits.

Yes, today we are proud to announce the distributed, off-line social network that lets you communicate with people in your own home using messages comprised of just one of each letter.

Yes, contain your excitement, for today we launch 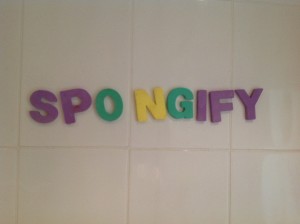 Free from the technological constraints that apply to services like Twitter, Facebook, and SMS, Spongify lets you send short, non-real-time messages to those sharing your bathroom.

Yes, we hear you, doesn’t the limit imposed by having just one of each letter restrict what you can say?  And the answer is a resounding YES! But, rather than see this as a restriction, we see it as Spongify’s key feature. Much as Twitter’s character limit made people creative with how they expressed themselves, we believe Spongify will help you keep your messages short and beautiful, poetic and sublime.

Here’s an example conversation to show you how it works: 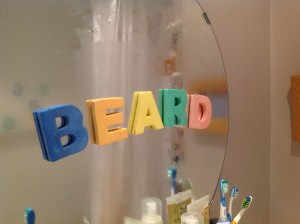 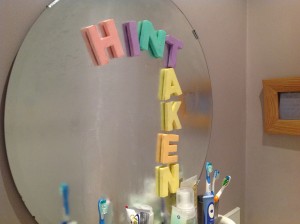 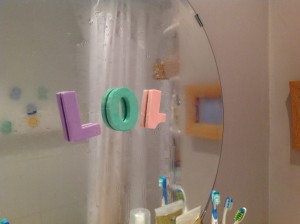 Spongify is a distributed system, which means, you’ll need your own bathroom and set of letters to run it. The beta version doesn’t interoperate with other Spongify instances but who knows how this technology will evolve in the months to come.