So…now it’s dry I’ve been able to have a few days commuting on the Felt (which Sally has suggested be called “Fuzzy”…Fuzzy Felt…geddit?). What’s it like?

IT’S AWESOME. It’s so comfortable that it seems to be helping my bad back get better. It’s so light. It’s so quick.

Actually, it doesn’t seem to have a higher top-gear than the Raleigh, but the acceleration is so fast and smooth you arrive at top speed very quickly and can much more easily maintain it.

I have had some more learning to do. I was a bit tentative after my fall on Saturday, but in the dry it does corner OK. I’ve yet to push it hard and fast round a corner though and the bike does very much want to go in a straight line. I’m wondering if I turned the handlebars too much on Saturday rather than leaning?

The dropped bars are great for the variety of hand positions, but it’s sometimes a bit shaky getting between them – especially the one time I actually went down to the drops. How are you supposed to do this? One hand at a time knocks your steering off.

I’ve also had problems with riding through town. Braking, changing down and indicating at the same time is much harder on this bike, especially while I’m nervously preparing to corner too. The trick with indicating from the brake hoods definitely seems to be to grip tight with the hand on the bars while you do the one-handed thing.

In addition to my little scratches from the weekend I now also have a bit of surface rust (see picture). I don’t THINK this is a big deal and I’m hoping it will disappear just with wear. But proof that you should definitely dry the chain off properly after a wet ride. 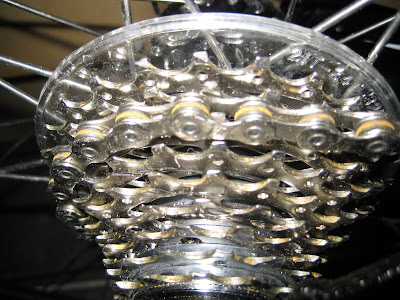 In general then, I’m very glad I invested in a road bike. It WAS worth it after all, and I’m looking forward for some more dry weather to really take it on a decent run.