Today was supposed to be really exciting – it turned out to be quite depressing. Mostly. It did in fact end on a high – but we’ll have to talk about a few lows before then.

I’ve been very excited about the imminent arrival of “The Felt” – my new road bike.

This week, the CycleScheme voucher arrived in the post, and I called the shop and told them to have it ready for me to pick up today.

So I woke up like a kid on Christmas day – not really able to wait for the short trip to the bike shop to get started.

We ran a few errands in town first. It was a horrible day, and as I left Sally and headed to the bike shop I began to wonder if I should have taken the car to go and pick it up. Oh well, I’d gone so far and I wasn’t about to bail out. I’d have to just get it home in the rain and give it a good wipe-down when I got back.

The bike was waiting and after a brief re-fit I tentatively hopped on, expecting it to handle a bit differently to the cheap, old Raleigh hybrid. And I was right!!! Half way home, I fell off. Turns out that 25mm, semi-slick tyres don’t like doing 90 degree turns in the pouring rain.

I tore a small hole in my waterproof jacket, put the saddle out of alignment, and I think I put the rear wheel out of true slightly – it was certainly rubbing on the brake pads.

Words can’t really express my annoyance. I arrived home, drenched and with a fully-battered sense of pride.

A few photo’s of the scrapes the poor thing received. Here’s the Tiagra rear mech (derailleur) – which, on inspection, feels pretty sturdy and tough – maybe a cheaper bike wouldn’t have survived as well: 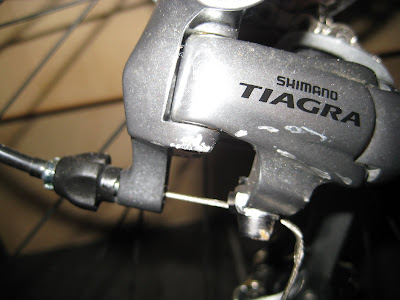 And here’s the right brake hood: 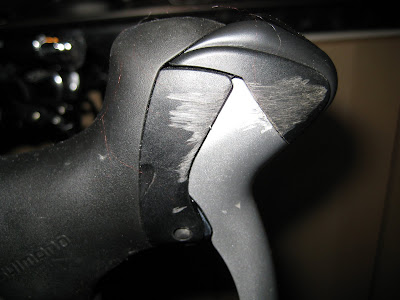 So, a little gutted, I spent some of the day fixing on the lights and computer and making a few adjustments. While doing this I took advantage of the quick-releases, and whipped the rear wheel out to check it’s state of trueness. To do this you have to deflate the tyre to get the”bulge” of the tyre between the released brake pads.

Wheel and tyre didn’t seem too bad, so I refitted them and re-inflated. Half way through inflation….HHHHHIIIISSSSSSSSSSSSssssssssssssbother.

That, my friends, is the sound of what I can only guess was a pinch puncture, and my (fairly censored for the purposes of this post) response.

Generally, it was a bit of a crappy start and I was feeling very dejected. I was already beginning to wonder if I’d done the right thing buying it. Part of me knows that I just need a couple of good rides on it and I’ll think it’s the bee’s knees, but right now, I’m pretty worried about how much damage I’ve done. The puncture is patched and the rear wheel’s not rubbing the brake pads any more, but it isn’t straight and I don’t know how it will ride.

I also know that I’ve had a REALLY good lesson in road bike handling. A lesson that I was bound to learn eventually and which was much better learned doing 5mph in town than doing 25mph on a wet country road. Maybe it was a blessing in disguise!

In between all that, Sally and I tried wallpapering the chimney breast in our lounge. This was also a fairly spectacular flop and added to the days downcast-ness. The paper dried up and curled at the corners and shrank so that the gaps between drops got bigger and it was generally disastrous.

We pushed on though. We resolved to go and buy another roll and try again. If we failed second time we’d give up and just paint the darned thing.

So we tried again – and it was a success! Or so it seems. Second time round we followed the instructions to the letter. Lessons learned about wallpapering:

I finished the day by putting up a new light fitting, which included my first experience of cutting a hole in plaster (not much to say about that – other than it makes a LOT of dust!).

It had been a long, roller-coaster of a day. Excitement, an accident, dejection and worry, failure, success and, as we stepped back and admired the new living room, great joy. We’ve lived a lot today, we’ve learned a lot today. Sometimes those set backs test us, and if we push through them we can by much more proud of the results than if it was easy!