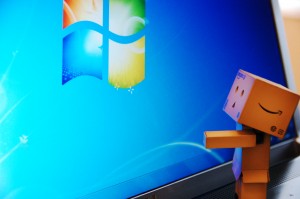 We have a NetBook for travel and simple web browsing (must write about that sometime), but the other option, if you wanted to do any serious work, was a 6-or-7 year old Sony Vaio laptop with, I think, 256MB RAM, no built-in Wifi, no webcam, no microphone, a battery that lasted 60 seconds – if you were lucky (i.e. it was tethered) and only 1 working USB1 port.

As a fairly major geek who works in IT and does little web development projects at home it’s kinda unbelievable that I’ve waited to long to upgrade.  It was part frugality, part stubbornness, part not-wanting-to-buy-anything running-Vista, but with the release of Windows 7, the Christmas sales and the approaching rise in VAT we finally decided that the time had come.

It made sense really – replace both the desktop and laptop with a powerful laptop, run everything quicker, upgrade storage, run at much lower power, and reduce all the cables, power bricks and peripherals.

There was some debate about whether or not to get an Apple.  My iPod touch experience has been very good and lots of people we know have Apples.  I asked around about this and most people said “get an Apple” without really telling me why I should.

So I stuck with what I know and got a Windows laptop direct from Dell.  Probably not as fancy but MUCH better value!

So, the new laptop has arrived and we’ve entered the modern age of computing.  And I have to say I like it.

Windows 7 has surprised me by not being as different to XP as I thought it would be.  There are, of course, substantial improvements, but it’s been easy to get to grips with.

At first I wasn’t sure that the speed improvement of the faster…well, everything…was that noticeable, but I’m pretty sure it is now.  Startup time is still not as fast as I would like it, but once running it flies and things like user switching, that we couldn’t really do before, just work!

Moving stuff from the old computer was, of course, a bit of a challenge.  I tried using Windows Easy Transfer, but it wasn’t easy, definitely wasn’t fast over the network, and I didn’t trust what it was doing behind the scenes.  We DID just about end up using it in conjunction with an external hard disk, but I’m not sure it made the process of moving our data any easier.

Getting my regular free/open source applications installed was hugely simplified by Ninite. Importing mail into Thunderbird from my old Outlook Express files was easy, and XMarks made synching my bookmarks a doddle.

The only real trauma was getting iTunes to keep my library (with playlists, import dates, ratings, album art, etc) intact whilst moving, and, hopefully, not screwing up my iPod when doing a first sync.  This did happen pretty smoothly, though I’m not entirely sure how I achieved it.  I did at one point have two entries for each track, but I just deleted the new ones and convinced it the the old ones were in C:\Users\ rather than C:\Documents and Settings and all seemed to be OK.

Overall, this has been a really good move, and, with all that’s going on that might need more web development and online collaboration, a timely one too.