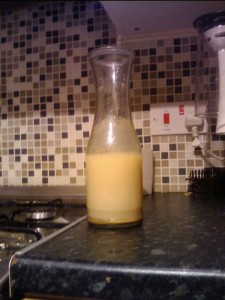 No.  I actually have something literally brewing.

Last Christmas (2008!) I got given, by one of my Godsons, a Ginger Beer kit.  It’s been sat in a cupboard doing nothing for ages, even though I love Ginger Beer.

During a recent tidy-up it came out of the cupboard and I decided to get it started.

I sterilised a nice old wide-necked wine bottle, boiled and cooled some water and added the yeast, sugar and ginger.  I’ve been nurturing the plant quite zealously, but needed some additional equipment to finish the job.

Fortunately, while visiting friends in Durham, we made a trip to Whitley Bay 1 where there is a fantastic home-brewing shop that seemed much bigger inside than out 2.  While my friends and wife looked on I was given a fascinating lesson in home brewing by a wonderful, informative-but-not-at-all-patronising man – you don’t get customer service like that much these days!

I left Whitley Bay with some bottles, some corks, a small brewing bin, some sterilising powder, and a 25p muslin sock.

On return to Swindon I fed the plant once more and then, the next day, sieved the plant, added lemon juice and sugar and bottled the beer.  While that’s maturing the plant has been restarted!  I thought I’d killed it at first but it’s definitely still alive and responds well to being fed. 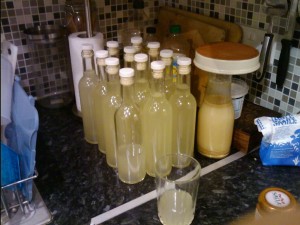 Oh, and, OK, I confess, I’ve tried some and, even half-matured, it’s delicious!  Though I’m not sure how much that’s because I made it.

The home-brew shop experience was interesting.  A whole other world of potential geekiness.  I can see how/why people could get hooked on brewing.  My brew is precious and needs tending and my attention is rewarded.