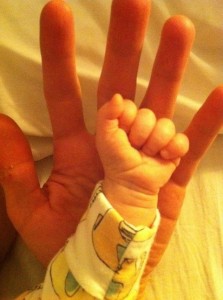 I found out the other day that a guy I know’s wife is pregnant. It’s funny how, as a newbie parent myself, it’s so tempting to offer advice. I also had a conversation this week with someone else who was talking about the dilemma of offering this kind of ‘help’.

And the longer I am a parent, the more I believe that the best advice is not advice at all, its almost anti-advice.

So I present the sum of my parenting knowledge:

Maybe it doesn’t sound like it, but I’m actually HUGELY grateful to everyone that’s offered us help, advice, encouragement and prayer in our first few months with Isaac. But the truth is, we’ve listened to and, I hope, respected everyone’s opinions, and we’re doing things our own way.

I’m now about to give in to temptation and actually offer one concrete piece of advice myself. It’s not about feeding, nappies, which buggy to get, or how to get your baby to sleep. No. It’s this thing that people kept telling me early on which I initially found hard to believe but now hold firm to:

Isaac no longer smells of baby. I miss that.

Isaac doesn’t need cuddling to sleep as much. I miss that. It used to be so annoying that he’d only drift off in our arms. Nowadays, I look for times when I can get to hold him for half an hour or so.

Isaac doesn’t mimic us any more. I miss that. For a few weeks he tried to copy the sounds that we were making. Now he just makes whatever sounds he wants to regardless of what were babbling at him.

Isaac doesn’t fit in his baby clothes. He’s in 6-9 months sizes now. He had some nice outfits. We miss that.

Isaac doesn’t poo as often. Bizarrely…I miss that! Change time used to mostly be a fun time. Now it’s infrequent and a chore.

So many things Isaac did, or that we did with him, have already changed or gone. If you have a young baby, (s)he will be different by this time next week. Enjoy what they’re like now, even if it’s difficult and stressful, because they won’t be like it again.