[Note: I just found this sat in my drafts. For some reason I bailed out of posting it when I wrote it back in November 2011. I don’t know why. To my knowledge, I’ve not cycled this roundabout since – and it’s still a bit scary to drive!]

Those who follow me on Twitter, or who have been reading for a while, may know I go by the alias “magicroundabout” sometimes. This is a name I acquired long ago, for good reason at the time, and it’s stuck.

I chose the name, not after the children’s cartoon, but after the junction in my home town, and current place of residence: Swindon. If you’re not familiar with the junction perhaps a video demonstrates best:

Now, the Magic Roundabout has a bad reputation. “Complicated”,  “scary”, “designed by traffic planners in the 70’s while on acid” are all things you’ll commonly hear.  But it’s actually really good and I’ve never felt unsafe in all my hundreds and thousands of crossings on it.

The real danger is almost at the end of my road: Bruce Street Bridges.  Where I just suffered my second “assassination attempt” (to coin a phrase from Karl).

Take a look on Google Maps.

I’ve now TWICE had drivers charge at me whilst cycling this roundabout.  I think today’s was a low-sunlight-induced “Sorry Mate I Didn’t See You”, but my opinion would be that if the sun’s in your eyes you slow down and look twice. And then look again! Not speed up!

The previous incident had no such excuse.

I’m fine. But finding this junction increasingly dangerous, even in a car.  More and more people coast towards the give way lines, stopping is the second thing on their mind.  I confess, I’m probably guilty too.

Of course, there’s never any excuse for bad driving, but I think bad driving is encouraged by the design of the junction:

1) It’s really busy but I don’t think it has an even-enough flow of traffic.  There are places where, at peak times, it’s impossible to join the flow of traffic because it’s all coming from one side.

2) I think there’s too many lanes. Here’s an image of the approach to the location of my first assassination attempt (explore for yourself). There’s three lanes here on the approach from the left, and visibility approaching the roundabout from that direction is poor – people in the second and third lanes won’t be able to see much of what’s coming (but still want to coast in order to join the traffic flow). 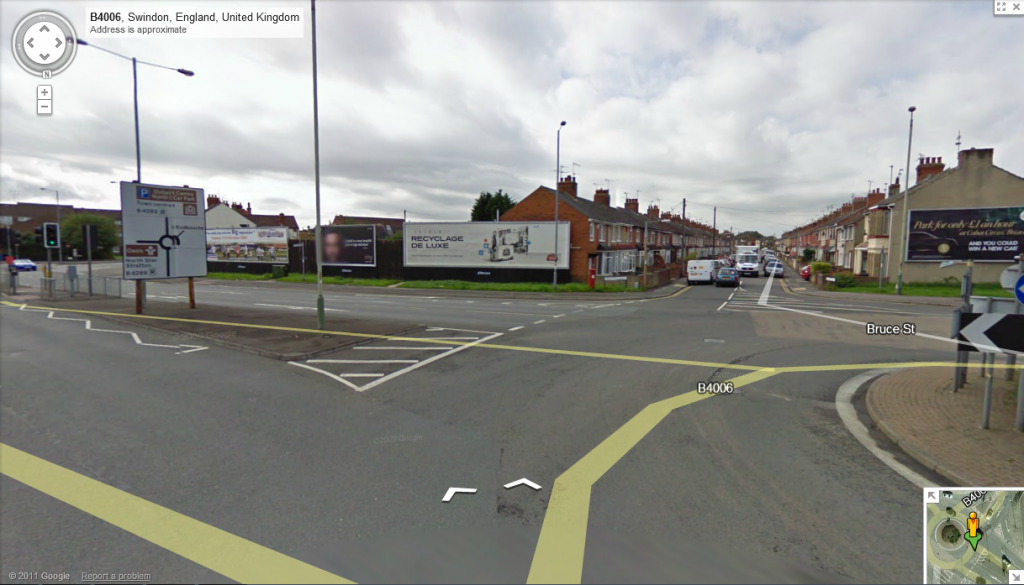 3) Because it’s a complicated junction there’s also lots of street furniture. That big sign on the left is important, but probably hinders visibility too.

5) Cycle/pedestrian infrastructure exists, but is incomplete. There are toucan and pedestrian paths and crossings, but they seem to only cover 3/4 of the junction. And it certainly feels like pedestrians and cyclists are impeded and low priority. I guess they’ve made it as safe as they can given it’s awkward, under-the-railway location and the busy-ness of the place.

There’s definitely driving issues too though. These aren’t huge roundabouts, you should be able to safely cycle them. But actually, I feel unsafe in a CAR on this junction.  I often find myself in a situation where I’m on the roundabout and cars are coasting towards me not looking like they’re going to stop. I slow down. They slow down but still don’t look like they want to stop. I slow down more.   I even got honked for doing this one day, like my own caution was causing an issue to the person whose place it was to give way.

This morning, that stuff, combined with some hideous overtaking didn’t make my first bike ride in a week particularly pleasant.

I’ve debriefed with Sally. I’m not cycling Bruce Street again. My life is too precious. I’ll stop and use the half-baked pedestrian/shared infrastructure.  Cycling feels dangerous. But I know that risks to my health are greater if I DON’T cycle. Especially now I’m a work-from-home freelancer.

There are plans to improve Great Western Way from Bruce Street right through to Transfer Bridges (PDF). I’ve not made it along to the exhibitions about this. But a quick scan of the plans makes me thing that they’ll fix some things, and break others. I guess there’s no silver bullet for a complex and busy junction like this.