It’s been a while and we’re off on holiday tomorrow so here’s a few thoughts to jot down before I go.

Easter and “The Passion”

It’s Easter Sunday. Easter is obviously a hijacked pagan festival – witness the eggs and bunnies that symbolise new life as spring approaches – heck the date of easter even changes with the lunar cycle! But, regardless of that, this is the time when Christians celebrate that Jesus rose from the dead and brought us a new and different sort of life. God has forgiven us of the wrong we’ve done and we can follow Jesus in faith knowing that he died and was brought back from the dead to live forever. I join with the many today who shout “Hallelujah” – Praise the Lord!

It’s been a good time of reflecting on what Jesus did and why it means so much to us. It
saddens me that people have so little understanding of the man at the centre of the Christian faith. I’m not the sort to ram it down people throats, but if they ask I’ll happily explain, and highly recommend, my faith, that I have come to see as the truth. But the
occasions to explain to people are sadly limited, even at this time of the year.

Encouragingly, this year, the BBC has done a screening of a 4-part film of “The Passion” – the events of the last few days of Jesus’ life. This has been very interesting to watch. Many have tried to interpret the events in their own ways down the years. I like the BBC’s attempt. It feels quite real and give you a good sense of what Jerusalem was like at the time, and some insight into why certain people may have done what they did on that first Easter. What it lacked for me was a spiritual element – little prayer, no angels, no miracles, no fear of God. I thought the pharisees more interested in what was going on that then disciples. It felt earthly, lacking a heavenly God. A tale told, but somehow lacking the essence of what was really going on. A political revolution was definitely going on, but the “kingdom of God” seemed relegated to little more than a nice-to-have desire of the heart. I think it lacked…well…passion!

But good on the Beeb for showing such a thing. And don’t get me wrong – it was a REALLY good re-enactment of what happened – captivating and compelling. It was just very non-committal too.

Oh, and there seems to have been a lot of chocolate around. Not sure what that’s about.

I attend a thing called a “Small Group”. This is a group of about 10 people from church who meet during the week to chat, pray, study the bible and share news together. Small groups are an important part of church life as they enable people to connect and meet in God’s presence in a deeper way than you can in a larger group on the Sunday.

This week I led the group in a study. It was the first time I’d done this for a long time and it seemed to go down well, but I’m not entirely sure. It’s always hard to judge how these things look from the other side. I really enjoy preparing and leading groups like this and I hope I’ll get to do it again.

With 3 days off before our trip away, we were meant to be gardening. Both digging and planting. But the weather’s been AWFUL. Snow, sleet, hail, rain, gales, freezing temperatures. So that’ll have to wait. Longer days are coming so I suspect some evening digging may be required. We’ve not planted a thing yet and only have a small patch of weedless garden.

So instead we’ve been concentrating on the house. Sally’s a star with painting and has made great progress on the dining room. We’ve committed quite a lot of the last couple of days to tidying up the edges and we’re VERY nearly done. Here’s the before and after: 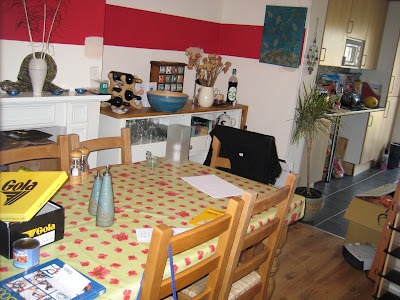 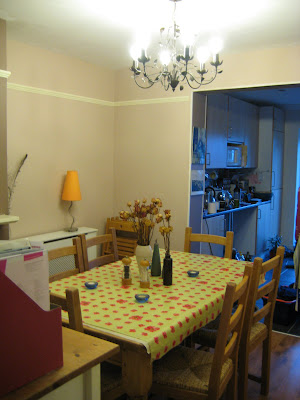 As well as painting we’ve also put up another nice light. I confess, I thought this was a bit over the top for the small room, but Sally loves it and it is a beautiful thing and we got it for half price. 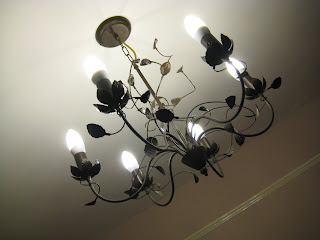 Wiring the new light in was interesting (as are most thing involving the electrics in our house). We have “loop in” wiring, so three cables come in from the ceiling; power in, power out, and the loop to the switch. This makes for a complicated bit of wiring to get the light connected up. However, in this fitting, the live and neutrals seemed to be wired backwards. All the black cables were where the reds should be, and vice versa. A quick chat with my dad and a few diagrams later and it appeared to be safe. After all, the previous fitting worked!

It seems that normally you have the three live wires tied together with power coming back from the switch to the light on the “spare” neutral cable. In our case, we had the three neutrals tied together with the spare live coming back from the switch. From a “logical” circuit point of view this means that the switch is on the neutral side of the light, rather than the live. There was no reason why it shouldn’t work. And, indeed, it does!

I’m sure I should be more scared of electricals than I am. I’ll get a nasty shock one day.

Darn it. The rats are back. We’ve heard vague scratchings recently and dismissed it, but they were definitely up there last night. I can only see one little hole outside that they might be getting in. We’ve put fresh poison down and some proper rat traps in the loft. Grrr….

Not much going on on the cycling front. I’ve been doing longer trips into work and back and generally enjoying being out on the Felt. Both bikes need a good clean which I was hoping to do this weekend and haven’t got around too. Oh, and I had to replace another spoke on the Raleigh. Not sure how this one broke but fixing it was easy having done it before.

Had other transport problems too when the car started spluttering a bit on the way back from the outdoors show. Kwik Fit fixed it with a new clamp on the exhaust – the existing one had come loose. They charged me £2. Bargain!

There are some other interesting developments going on that I can’t really talk about too. These are very much connected to our spiritual and church life and involve some interesting changes that are going on around us. Some of this is stuff that we thing God has been telling us might happen in some way over the last year so it’s very exciting seeing how that might come to fruition. Please, if anyone’s reading, don’t ask us any questions because we can’t answer them. I probably shouldn’t even be putting the teaser out.

More will be apparent in the coming months, I hope!

And so to probably our most anticipated holiday so far. We’re only going to York and the Lake Distri
ct, but we’ve both had such a hard few weeks at work that we REALLY need it. We’re looking forward to our first bit of fell walking on our own (how will we get on without a more experienced guide?), and we’ll hopefully have a rest in there too.

I will probably be quiet for a few days, both Blog and Twitter-wise. Back with some photos on Saturday!