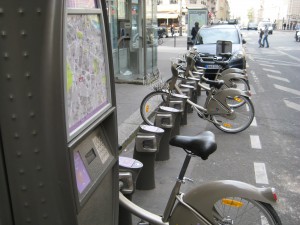 OK, so I previously said that I didn’t think much about cycling while we were in Paris.  But I did…a little.

Well, how could I not when there was the Velib bike-hire system to check out.

I confess, we didn’t use Velib 1, but that didn’t stop me being highly impressed with it.

There were lots…I mean LOTS of Velib bikes to use.  An equally astonishing number3.

There were lots…I mean LOTS of Velib stations around the city4.

You get the idea5.

Velib isn’t a system where Paris dipped it’s toes in the water to see what happened.  They’ve SERIOUSLY invested here in a LOT of equipment and infrastructure and it looks to have seriously paid off.  Velib is in no way half-hearted, it’s a real, serious form of public transport in Paris.

I wonder what makes it such a success.  Is it:

Or is it, as I suspect, all of the above?

Originally I had some questions though like what do you do when you need to park a Velib at a station that is full, but these all seem to have been thought out.

I was seriously impressed.   Although, sadly, it seems that Velib hasn’t been without its problems – Wikipedia reports a high level of theft and vandalism.

London launches its cycle hire/sharing system in July with:

Yet I’m sceptical. With our weather, culture and roads, will we, the English, “get” it, and we use it?

I guess only time will tell.